Karijini National Park is a national park centered in the Hamersley Ranges of the Pilbara region in the northwestern section of the Australian state of Western Australia. The park is located just north of the Tropic of Capricorn, approximately 1,055 kilometers (656 mi) from the state’s capital city, Perth. 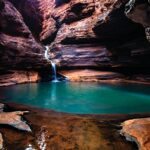 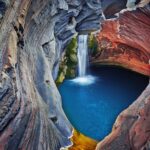 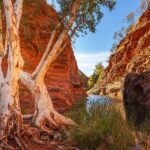 Karijini National Park is an Australian national park centered in the Hamersley Ranges of the Pilbara region in the northwestern section of Western Australia. The park is located north of the Tropic of Capricorn, 1,055 kilometres (656 mi) from the state’s capital city, Perth. Formerly known as Hamersley Range National Park, the park was officially renamed in 1991.

The park is physically split into a northern and a southern half by a corridor containing the Hamersley & Robe River railway and the Marandoo iron ore mine.

The park is served by the Solomon Airport, located 15 kilometers (9.3 mi) to the west.

History:
A party led by explorer F.T. Gregory explored the area in 1861. He named the Hamersley Range, on which the park is centered, after his friend Edward Hamersley.

Climate:
The park is located in the Pilbara region, and is mostly tropical semi-arid climate. In summer, thunderstorms and cyclones are common, bringing 250–350 mm of rain annually. Temperatures on summer days frequently exceed 40 degrees Celsius, while winter nights can bring frost.

Geology:
Several gorges that flow north out of the park—including Dales, Kalamina, Wittenoom and Yampire Gorges—provide notable displays of the rock layers:

Features:
The park is most notable for its many gorges containing slot canyons, waterfalls and water holes with visitors sometimes swimming in the cold pools of water.

While the park is fully open to the public, visitors are warned to exercise due caution when walking in and around the vicinity of Yampire and Wittenoom Gorges near the northern boundary of the park due to the presence of blue asbestos—a known cancer-causing agent when inhaled—which occurs in a number of the rock formations.