AntConc is a freeware concordancer and is very useful for searching through large swathes of texts to look for patterns of usage and so on.

As an example, the screenshot below shows a concordance search for the word, word. The program has searched through a number of corpora (collections of texts) and displays where the word word has occurred in context (known as KWIC or KeyWord in Context) 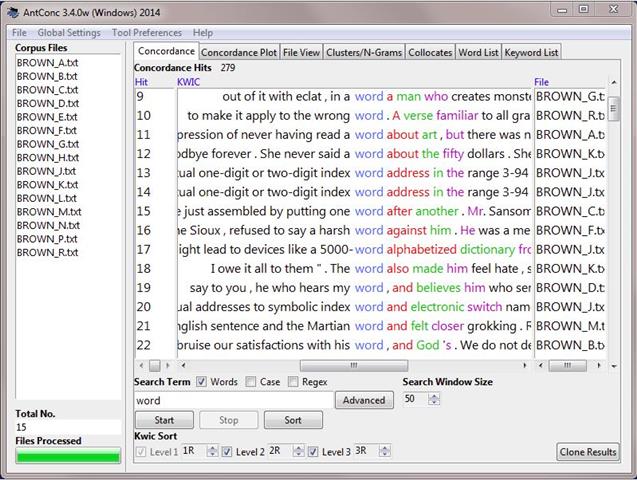 Looking at this you can determine, amongst other things, common usages and patterns, lexical chunks, and collocations.

Basic Use
The first step is loading files to be analyzed. You can either load a single file or directories of files. It handles plain text files well but can fall over a little with Word documents and suchlike.

Once you have the corpus loaded you can analyze it in various ways.

As in the example above, you can look at how a particular word is used in context. This is incredibly useful and if the program is used by EFL students they will be able to work out patterns of usage which will help them not only remember the word but also use it effectively and well.

This is also known as an n-gram search.

This displays all the words used in a document with the number of times they occur. Displaying the words and their frequency allows you, as a teacher, to see which words are most useful and necessary to your class from a particular document. (It’s better for your class to learn common words rather than uncommon ones!)

AntConc is available for Windows, Mac OS X, and Linux. AntConc is written completely in the Perl 5.8 programming language using ActiveState’s Komodo development environment and continues to be developed through feedback from users around the world.

It runs reasonably fast (slower with larger corpora of course) but is sometimes a little fiddly to use.

It was developed by Laurence Anthony of Waseda University, Japan originally for students but it has also found use amongst linguists as a simple text analysis tool.

The latest version of AntConc can be downloaded; for Windows use the EXE file, for Mac use the ZIP file. TAR.GZ files are for Linux.